The parabolic system is a good complement to many technical analysis strategies. However, Parabolic SAR is of little interest on its own. The reason for this is its duality, because of which it is unable to recognize periods of low market activity (flats). But in combination with other trend indicators or oscillators, Parabolic shows all its advantages. In this article, we will conduct a detailed review of an SAR-based strategy for Binomo with additional ADX filtering.

To trade on the system, you will need to add two indicators and select a volatile trading asset that is suitable for short-term trading. The 15-second time frame compared to the 5-second one does not impose severe restrictions on the range of assets, but not all currency pairs will do. If multiple gaps and zero candles which don’t have bodies or shadows are formed on the candlestick chart of the asset, then another trading instrument should be chosen.

Step-by-step instructions for setting up the Binomo platform: 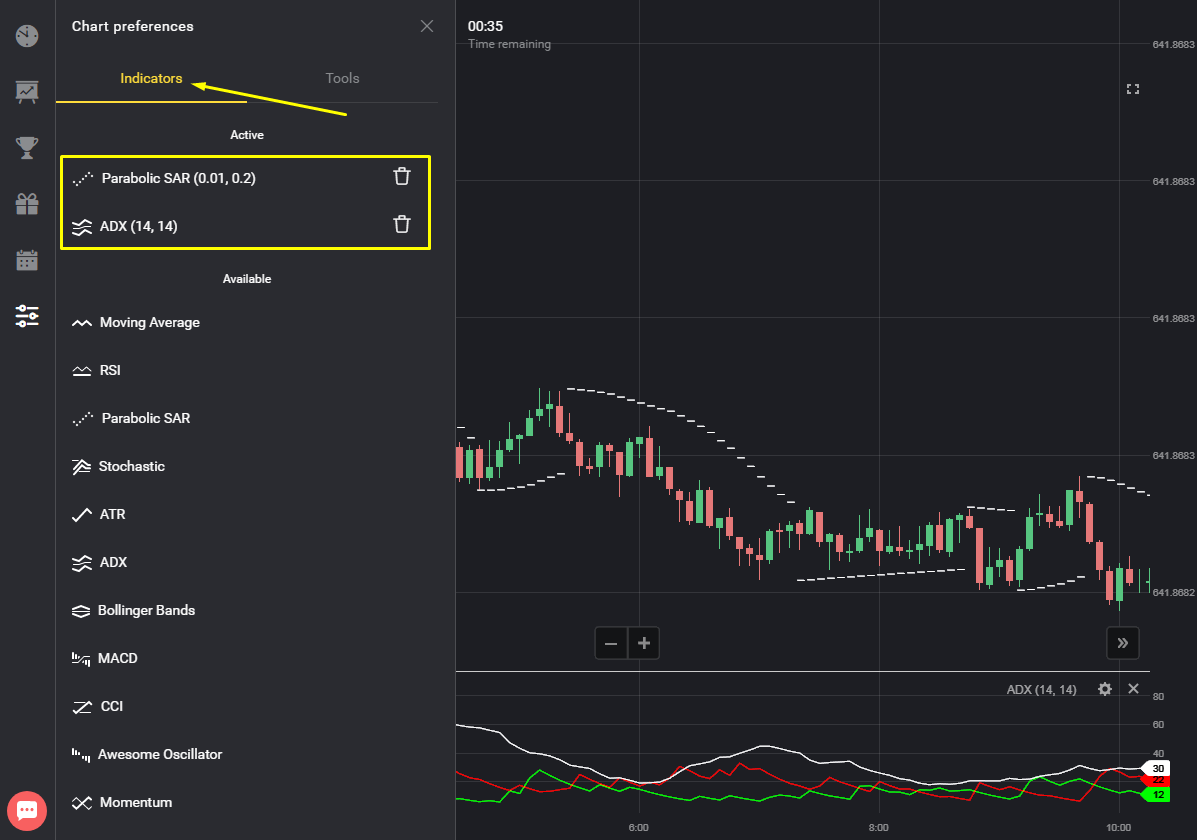 The Parabolic system should be adjusted to the minimum sensitivity level. The value of the “Minimum AF” parameter is set to 0.01. The “Maximum AF” plays a minor role and does not have a significant impact on the position of the indicator points, so it can be left at the standard value. Reducing the period of Parabolic SAR leads to a decrease in its sensitivity, but at the same time the accuracy of the signals increases. The sequence of points becomes more direct and breaks less often.

ADX is an effective indicator of the strength of directional market movement and cumulative volatility. It consists of 3 lines – a positive, negative, and undirected index. The first two curves are colored green and red. The white line is not used in this strategy, so its position can be ignored. However, if it shows growth during a downturn, that is a good sign.

The Parabolic system is a trend indicator that effectively shows reversal points. In the system under consideration, it is supplemented with the effective ADX oscillator, which allows you to determine the strength of directional trend movements. Thus, it is possible to reject insignificant fluctuations, paying attention only to strong trends that have great inertia.

The signal for an increase is the formation of a SAR sequence gap with the transition of points to a lower position relative to the price bars. Confirmation is growth of the positive ADX index. The green line should break through the red one and, as a result, firmly fix itself above it.

The signal for a decrease is a gap in the SAR sequence with the points moving to the upper position relative to the candles. The signal is confirmed by the intersection of +DI and -DI. The red curve should take the initiative and move to a position above the green one.

An indication of a likely false response is if there are too frequent gaps in the sequence of SAR points. On a 15-second interval, you can focus on 10-15 candles. If reversal signals are formed more often and the prevailing direction of movement is horizontal, then it is recommended to refrain from trading on the signals until the beginning of a pronounced directional trend. You should also pay attention to the nature of ADX curve building. If the red and green lines are repeatedly intertwined with each other in a zigzag fashion, that is also a negative sign.

Using ADX allows you to reject about 20% of false positives and the remaining 30% are filtered by reducing the sensitivity of the indicator. If you trade on just the Parabolic SAR with the standard settings of the Minimum AF period at 0.02, then the total accuracy of the output signals will be several times lower than in the system we’re considering.

The parabolic system unleashes its full potential in combination with other instruments that have a neutral phase. Parabolic works well not only with ADX, but also with RSI, MACD, Awesome Oscillator, and CCI. There is also a separate strategy using the Moving Average, where trading is conducted on the intersection of the MA curve with the SAR points. In conclusion, we emphasize once again that this indicator, despite its simplicity, has very extensive potential.