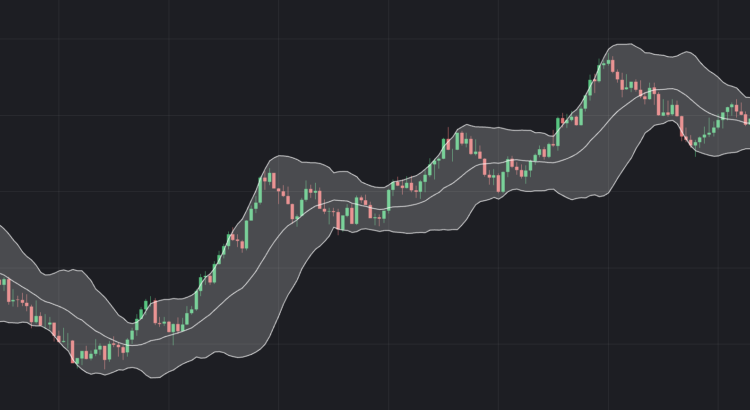 The Bollinger Bands (BB) is a trend indicator created by John Bollinger based on the Moving Average. When the tool is added to the chart, a price channel is formed which shows the factor of price deviation from the “normal range,” calculated using a certain formula. Bollinger Bands is a multifunctional solution that can be used to determine the level of market volatility, find reversal points, and filter the signals of other instruments. In this article, we will review the tool, its history, and different approaches to its practical application.

Despite the name, the actual creator of the tool is Perry Kaufman, who described the concept and formula in detail in 1987. He cited it in the section where new market analysis systems for stock market games were being considered. Later, theory on it was advanced by American financial analyst John Bollinger. He appeared to the world as a pioneer of computerized trading.

It was John who made a significant step in the big job of “digitizing” all the technical systems supporting stock trading and market forecasting. He acquired a computer unit in 1977, a few years after the creation of the first personal computer. His job was to develop automated software products for technical market analysis. Bollinger is also the creator of the method of sectoral breakdown of stocks and the formula for calculating industrial indices. But his most famous development is the indicator we will review in this article.

The Bollinger Bands are a pattern of 3 Moving Average lines. By default, SMA (simple Moving Average) is used, but in the settings you can choose any type – exponential, weighted, triangular, or others. On the Binomo terminal, for example, 11 of the most popular options are offered. The essence of the indicator lies precisely in its formula for the interrelatedness of periods and the indentation of each line. 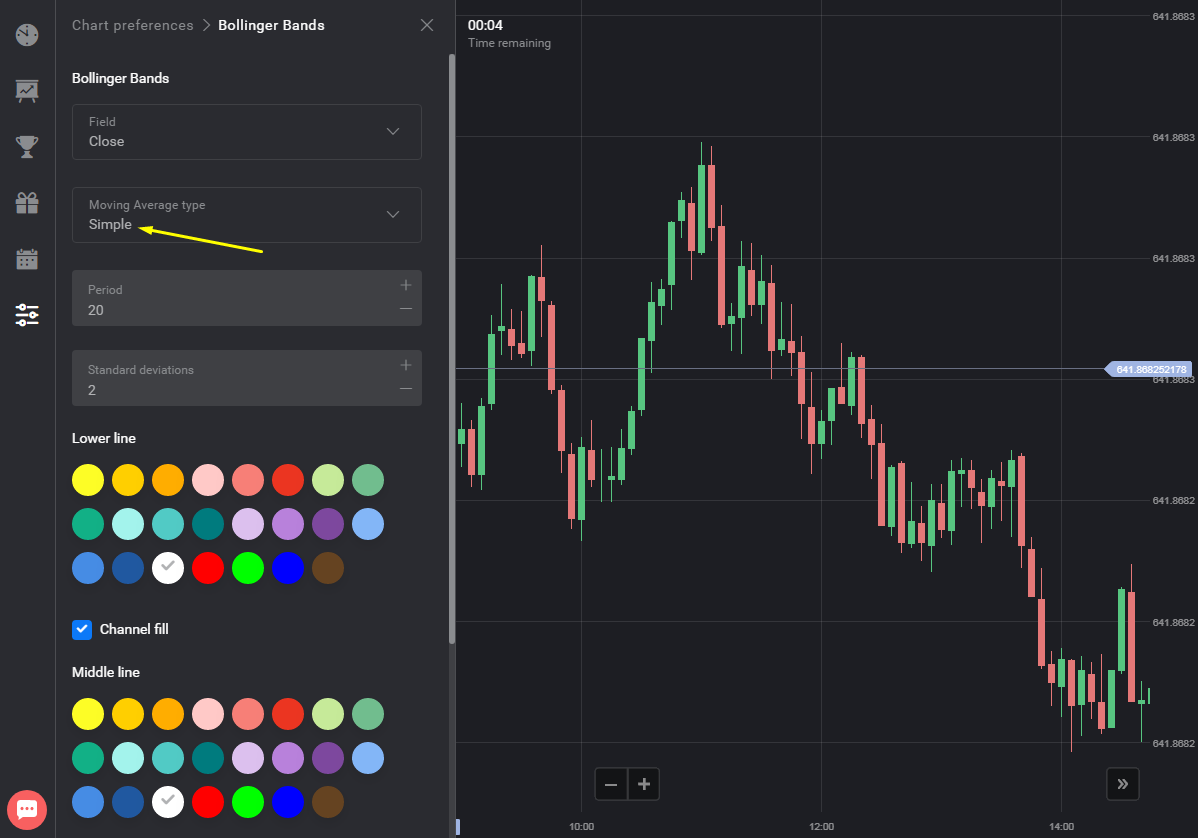 The tool consists of 3 elements:

The width of the channel is dynamic and it is constantly changing like waves in the ocean. The value of the indicator is determined by a formula that calculates the average value of the amplitude of price fluctuations on the chart over the last period specified in the settings.

There are several approaches to trading using the Bollinger Bands. For starters, let’s consider the recommendations of its developer. John pointed out the following patterns when working with the tool:

Based on these aspects, traders have developed a number of practical trading techniques for this indicator. The main signal is the point when the price bounces from one of the borders with the subsequent breakdown of a neutral separator. A prerequisite for this signal is preliminary contact with the border or it going beyond it. The picture below clearly illustrates this. 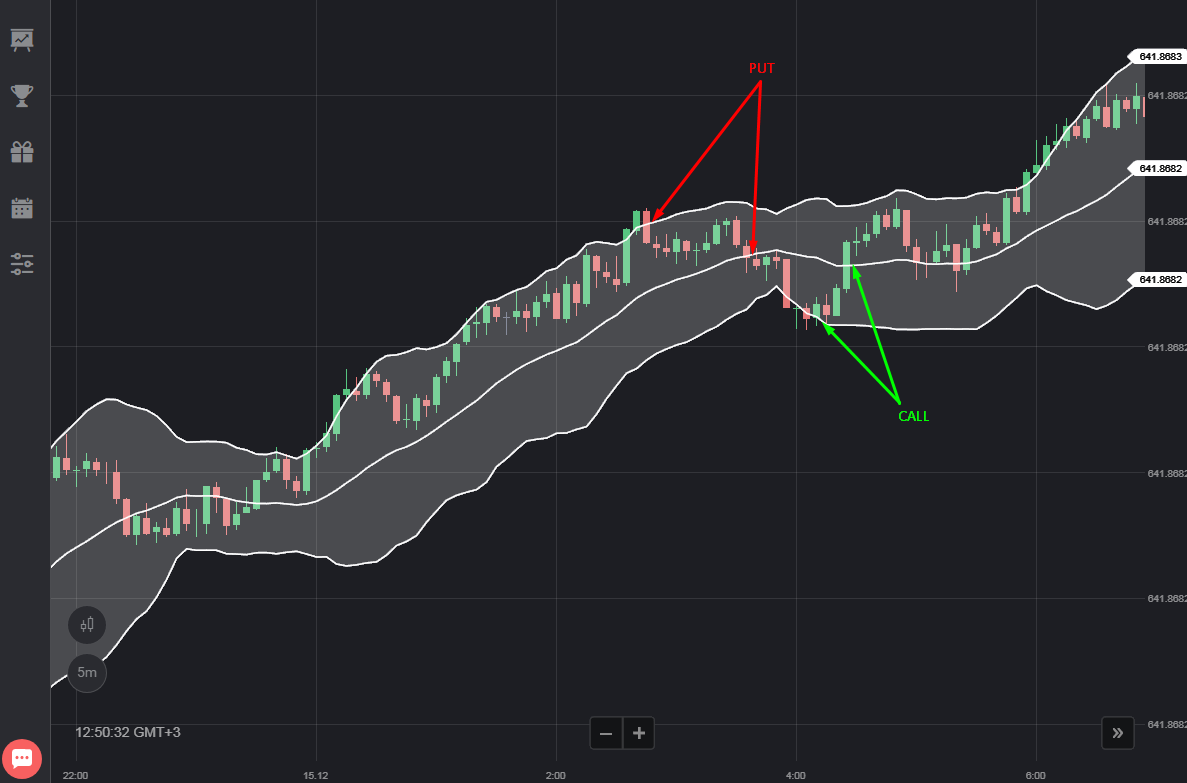 Some traders focus on reversals that occur on the lower or upper Moving Average. However, without much experience or the use of auxiliary tools, the accuracy of these signals will be low. Therefore, novice traders should enter the market only after receiving confirmation.

It would be appropriate to add the words of John Bollinger – if the market comes into contact with a border and then it bounces off and breaks through a neutral separator, then the probability of reaching the opposite band border is 70-80%. Based on this pattern, you can effectively trade on the BB indicator alone.

The tool can also be used as an effective indicator of volatility, which will allow you to recognize different phases of the trend – emerging, active, reversal. A narrowing of the channel indicates the beginning of horizontal movement, and expansion indicates the formation of a directional trend. 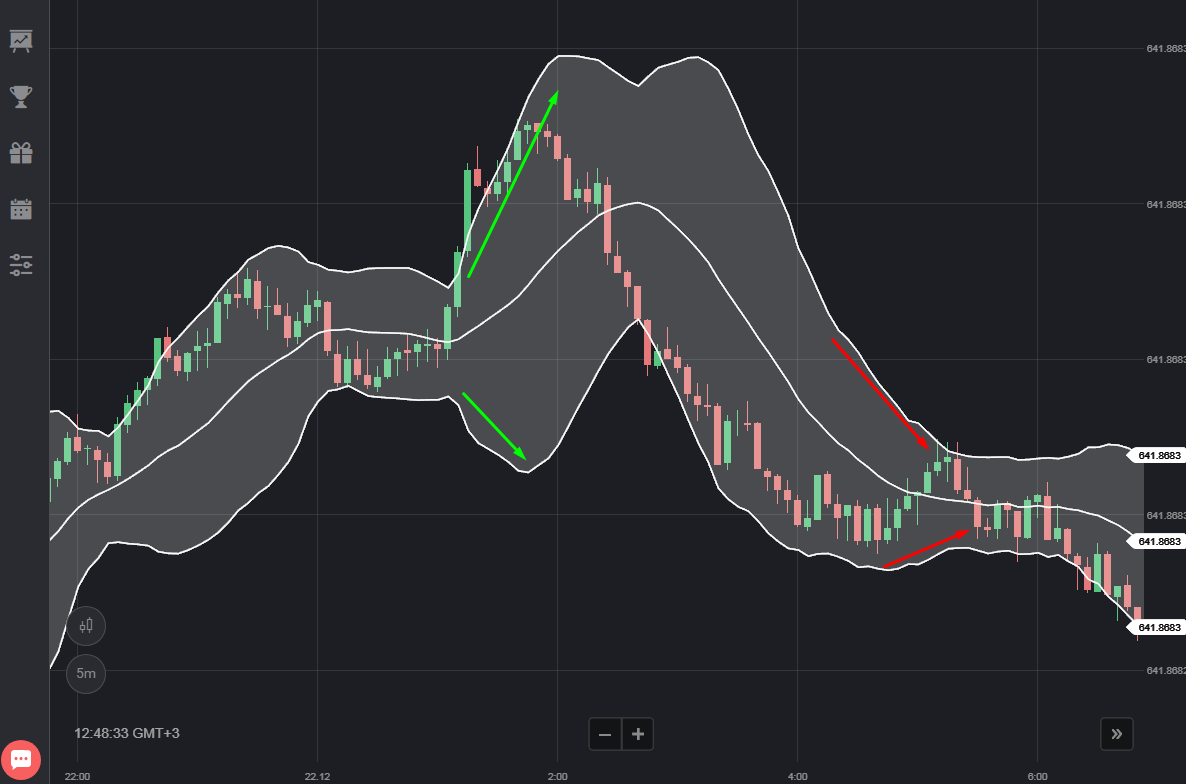 We have considered a technically simple indicator, but one with great potential. It can be used when trading on any period starting with 5-second charts. The Bollinger Bands work well in combination with oscillators. However, an exception is the Commodity Channel Index (CCI), where a similar calculation formula is used, which makes their combination meaningless.