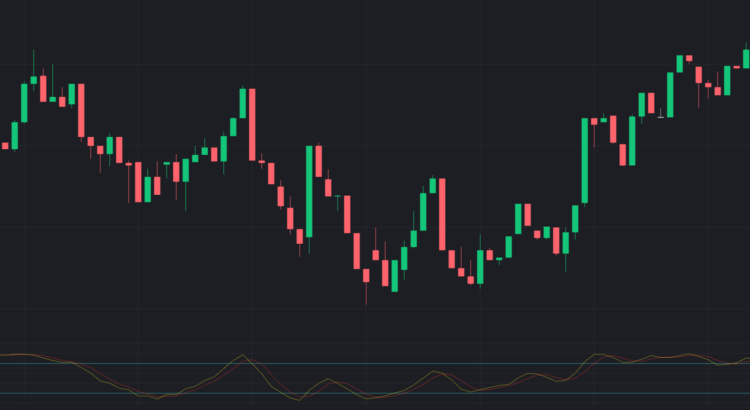 Stochastic is a technical analysis indicator of the oscillator class. It shows the intensity of price deviation from a range of values for a certain period of time in the past. It consists of two lines. The instrument entering into the overbought or oversold state (extreme upper or lower positions) and an intersection of the lines indicates a probable reversal of the directional trend. Stochastic is included in the top 10 most popular indicators, and it is available in the range on the Binomo trading platform.

The Stochastic oscillator was developed in the middle of the last century by George Lane. It is the oldest instrument in its class. In the 1950s, there were no modern capabilities for computerized market analysis. Therefore, financial analysts were forced to do calculations on paper.

It is based on a simple pattern, according to which, the closing point of the price bars is usually located at the level of the local extrema (local highs or lows) when there is directional trend movement. If the price goes outside of the range and the candles on the chart close significantly below or above the nearest extreme points during that period, this indicates that the trend is exhausted and it will likely reverse.

Overview of the RSI oscillator

The indicator consists of 2 lines, fast and slow. The default fill color is red and white. Plotting is carried out in a separate window located under the chart. The oversold zone is located at the bottom, and the overbought zone is at the top. The standard zone level is 20 and 80 percent, but that parameter can be manually adjusted in the settings.

George Lane’s recommended default settings are as follows: averaging period – 14, zone settings – 20/80. However, if the activity on the market is rather low, the levels can be corrected to 25/75 or 30/70 in order to increase the number of signals.

The Binomo trading platform allows you to customize the appearance of the indicator at your own discretion. You can also customize the settings for the period and the border of the outer zones.

There are several approaches to trading on the Stochastic oscillator. Let’s consider the most popular ways to interpret its values.

Like many other oscillators, the Stochastic allows you to recognize divergence, when the market moves in one direction and the indicator moves in the opposite direction. It looks like this. Another price extremum is formed on the chart which is higher or lower than the previous one (depending on the trend type), and a symmetrical extremum in the oscillator window shows a smaller deviation. In such situations, they are usually guided by indicator values. Divergence indicates the exhaustion of an active price trend and an impending trend reversal. 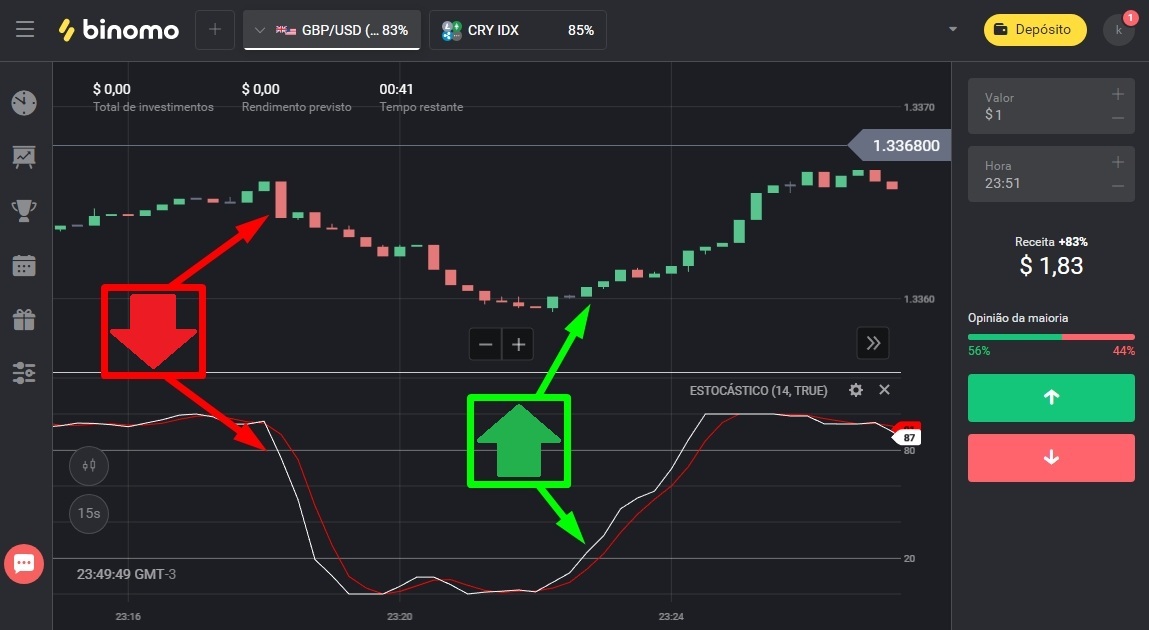 Signal #1 is the main one, and it is clearly represented in the illustration above. It’s when the oscillator goes outside of the extreme zones into a neutral position. In this case, the duration of previous price movement plays a role. The shorter it is, the worse that is in terms of expected forecast accuracy. Too frequent crossing of the fast and slow Stochastic curves indicates market volatility and horizontal movement.

In such a situation, traders are advised to refrain from trading on the signals of technical analysis indicators. On the Binomo platform, there is a fairly wide range of assets that do not correlate with one another. Therefore, you could try opening a chart with a different currency pair or index. The indicator settings will be copied automatically.

Stochastic is an excellent tool for market analysis. It is often used by traders in combination with trend indicators –  MACD, Alligator, Moving Average, and others. But it can also be used as the only tool.