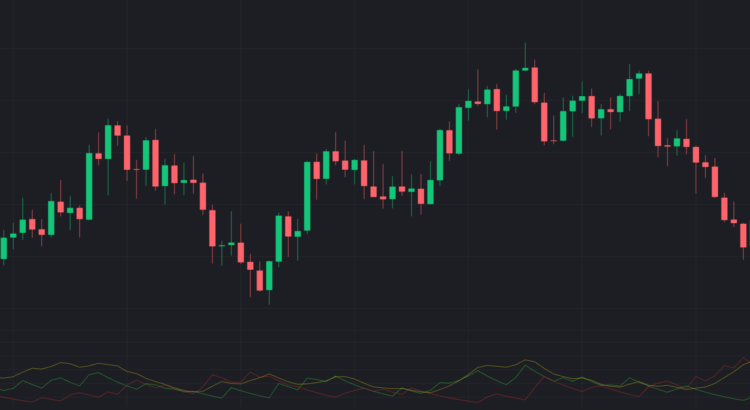 ADX is an indicator of average directional movement. A combined tool that shows the activity of upward and downward price movement. It consists of three lines, one of which shows the general level of market activity without reference to a directional trend. ADX is a hybrid instrument and it contains elements of an oscillator and a trend indicator. That means it can be used as the only element of a technical analysis strategy. In this review, we will look at the history of the indicator, its interface, and its potential for trading.

The Average Directional Movement Index was introduced to the general public in 1978, along with a number of other instruments. The developer was Welles Wilder, who is also the creator of other popular indicators—the RSI oscillator, the ATR index or Parabolic SAR. Most of his developments have become very popular over time among traders around the world.

Welles Wilder is a recognized leader in the number of technical analysis solutions. In fact, it was he who heralded a new era in the world of trading, when modern computers began to be used to analyze and predict financial markets.

The ADX index is formed from three colored lines, each of which is calculated according to a specific formula. The lines are drawn in a separate window, not on the chart. This provides a visual similarity to the Stochastic and other oscillators. Let’s take a closer look at the value of each Moving Average. 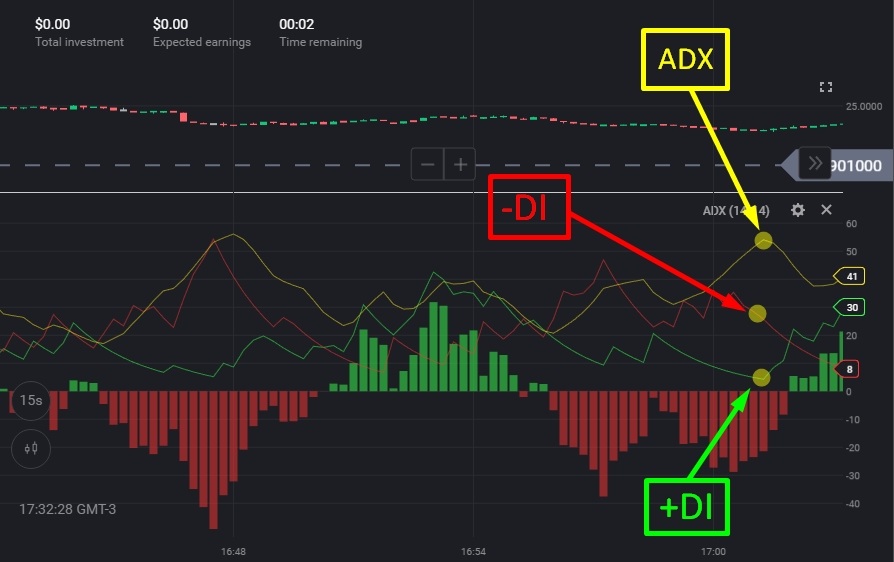 If the positive index starts to grow in the window with a simultaneous weakening of the negative one, this indicates the beginning of an upward trend. At the same time, strengthening of the positions of the +DI or -DI curves usually always leads to growth of the white line. For the purpose of visual presentation of the signals, a histogram is added to the ADX indicator on some trading platforms. It shows the coefficient of discrepancy between the positive and negative index. This functionality is present on Binomo, you can activate the histogram in the tool settings.

There are several approaches to interpreting indicator values. The main signal is the reversal point where the positive and negative indices intersect. The ADX also makes it possible to identify divergence and the strength of the trend impulse, its origin, and attenuation. Let’s consider the most popular approach to signal trading in more detail. 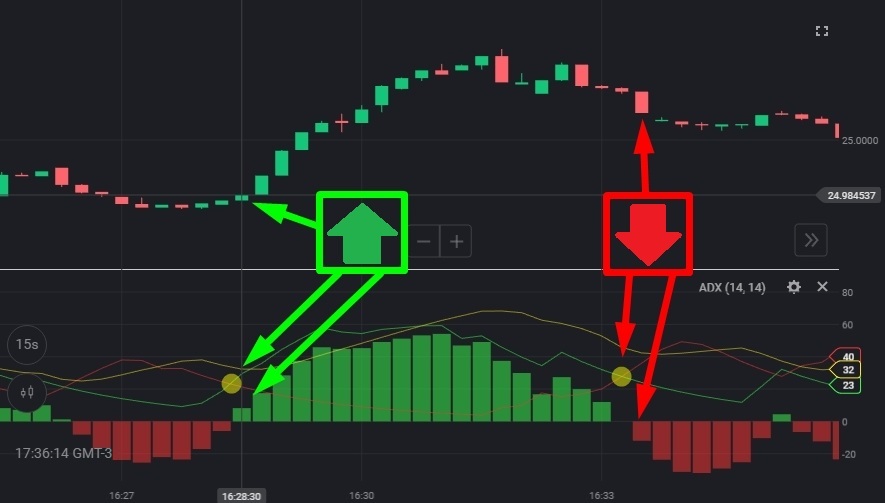 Confirmation of the signal to open a trade is an increase in the values of the main index of non-directional price movement (white line). If a reversal signal is formed against the background of weakening trend movement, this is a negative factor. As with other indicators, the ADX typically reacts to periods of low price activity.

A small distance between the curves of the positive and negative index, as well as too frequent intersections (more often than once in 10-15 candles on the chart), indicates probable horizontal price movement. If it is confirmed by the situation on the chart, it is recommended to refrain from trading at that time.

In fact, the ADX is a combination of 2 indicators—a directional index and a general trend strength index. The reversal points of the +DI and -DI curves are supported by an increase or decrease in the overall level of market activity. This makes it possible to receive highly accurate signals without the need for auxiliary tools. A good choice would be a combination of ADX and trend indicators, for example, the Alligator or Moving Average. On our site, we have already considered different strategies based on this tool.