The Commodity Channel Index ( CCI ) is a relatively new oscillator that first appeared in 1980. It consists of a native curved line, which is drawn in a separate window. Despite its name, it is a versatile technical analysis tool. It is based on a pattern of market behavior discovered by its creator. The oscillator is presently very popular and it is included in the basic range of indicators on most trading platforms, including Binomo.

CCI was developed by Donald Lambert. The oscillator was first introduced to the public in an article published in Commodities magazine. Initially, it was used only by analysts on commodity exchanges, which is reflected in its name. Later, traders started to appreciate the versatility of the tool, so it began to be used on stock and financial exchanges, and later on modern platforms for online trading.

Lambert suggested that market behavior is cyclical. Therefore, the patterns they had discovered would be repeated in the future with a high degree of probability if the initial conditions were approximately the same. If the current price deviates from the Moving Average by a greater value than usual, this would indicate a trend reversal. The conventional normal value is calculated using the standard averaging formula over a set period of time, which can be adjusted in the settings.

The indicator consists of one line which is located in a separate window. It has 2 internal borders at 100 and -100, which indicate the position of the overbought and oversold zones. When the curve approaches the upper border, that indicates an active uptrend, the potential of which is already coming to an end. The opposite situation with the entry of the curve into the zone below -100 indicates a pronounced downtrend which will end soon.

The oscillator has adjustable parameters for the period, which greatly influences the value. The standard value is 14. For strategies where the expiration time is 4-5 candles on the chart, that is the optimal value. On our website, we reviewed an equally popular indicator called RSI, which has a similar interface.

An advantage of the Commodity Channel Index is its versatility. Traders use CCI for various purposes. It can be used to recognize overbought and oversold periods, when the trend starts to weaken and it is coming to an end. It also helps you find price reversal points and the most optimal moments to enter the market. The main and most obvious signal of the instrument is the curve exiting from the overbought or oversold state. 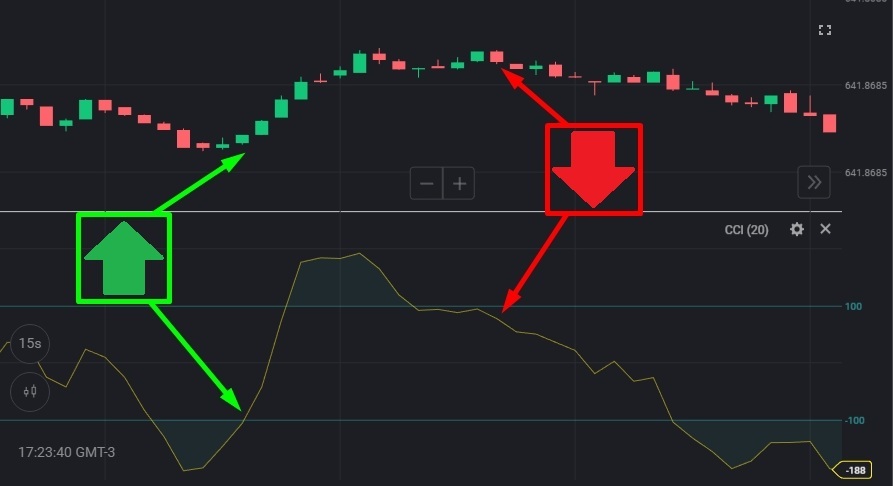 Short-term positions can be entered into at the moment the indicator enters the overbought or oversold state. That is usually after that the market moves in the original direction for some time due to trend inertia.

The indicator’s capabilities are standard for oscillators of this class. You can determine divergence with CCI in the same way as with RSI. For this purpose, a comparative assessment of local price extremes is performed on the chart and in the indicator window. If there is divergence, that indicates a probable weakening of the current trend and an early reversal of the trend.

The functionality of CCI is standard for oscillators and is similar in many ways, for example, to RSI. At the same time, they are different indicators that cannot completely replace one another. The Binomo platform features 3 of the most popular oscillators in combination with more than 10 trend indicators. Such an extensive range gives traders the freedom to choose the most optimal trading strategy. The potential of CCI is revealed in combination with other indicators that let you track medium-term price trends on the chart.